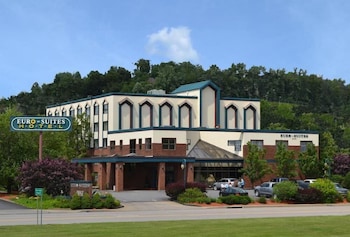 Property Location
A stay at Euro Suites Hotel places you in the heart of Morgantown, convenient to Ruby Memorial Hospital and West Virginia University. This hotel is within close proximity of Mylan Puskar Stadium and Mountaineer Field.

Rooms
Make yourself at home in one of the 78 air-conditioned rooms featuring kitchenettes. Complimentary wired and wireless Internet access is available. Conveniences include phones, as well as desks and complimentary newspapers.

Amenities
Take advantage of recreation opportunities such as a fitness center, or other amenities including complimentary wireless Internet access and a television in a common area. Guests can get around on the complimentary shuttle, which operates within 5 mi.

Dining
Enjoy a meal at a restaurant, or stay in and take advantage of the hotel's room service (during limited hours). Mingle with other guests at a complimentary reception, held on select days. Quench your thirst with your favorite drink at a bar/lounge.

Business, Other Amenities
Featured amenities include complimentary wired Internet access, a 24-hour business center, and complimentary newspapers in the lobby. A roundtrip airport shuttle is complimentary during limited hours.